Aegiale was the wife of Diomedes. While he was away at war she took up some lovers. You heard that right. Not just one, like Klytemnestra, but multiple. The accounts aren’t super clear on how many. It looks like just two dudes, but my little bi heart is imagining some lady involved too. But there’s not necessarily cultural/historical evidence for that. BUT, there is evidence for at least two dudes. I originally was going to draw Aegiale all super evil villain, but she just came out adorbs, because how could I not support this poly-woman? I mean, I love Diomedes, don’t get me wrong, but this woman was not afraid to go after what she wanted.

Some records state that she took a lover only out of revenge because some guy named Oeax told her Diomedes was coming home with a lady love whom he loved more than her. This wasn’t true. But the chronology is unclear from the (admittedly very quick) article I read and I feel like she already had lovers and this was not a revenge thing. I feel like some man decided it was a revenge thing because Women Having Sexuality is Scary. Men. *eye roll*

She has some parallels with Klytemnestra, HOWEVER, there is a difference. She didn’t kill her husband. She did try to, threaten to, and the only way he escaped was hiding in a temple to Hera, where he then had to sneak out and run away to Italy (which is why he is there to give Aeneas advice over in The Aeneid). BUT. She didn’t actually kill him. She also had more than one lover and, as far as I can tell: got away with it. Not avenging sons came along. I mean. I don’t know how long it last before some man came along to stop her, but I like to think she lived a tolerably long time with her lovers and died happy.

I drew her with crazy long sleeves because there is a butterfly that shares her name.

Did you know Helen and Menelaos had a daughter? Not everyone does. Her name was Hermione, and while every one else was off in Troy she was left behind and forgotten. Like. Helen? Menelaos? You definitely lose the parent of the year award. Odysseos faked MADNESS in order to try and stay and raise his son. Helen and Menelaos are so wrapped up in their nonsense it’s like Hermione Doesn’t Even Exist.

Supposedly she was engaged to Orestes. Orestes was the son of angry-faced Agamemnon and take-control Klytemnestra. BUT after the war she was married off to Achilles’ son Neoptolemos. This didn’t last, however, because Neoptolemos was an idiot (more on that some other day). Once Neoptolemos was dead Hermione was then free to marry Orestes. Or. Well. At least according to some versions of the story.

BUT WHO CARES ABOUT THAT. What I want to know is what was she doing BEFORE she was married off to Neoptolemos The Idiot? She was alone in Sparta ABANDONED and being raised by some nursemaid APPARENTLY, unless her grandmother Leda was still alive. WHAT I LIKE TO THINK is that she grieved and was angry and ultimately: got over it and moved on with her life. I want more of this woman and we do not get enough of her AT ALL. One day I will probably write a short story for her, because come on. She survived being surrounded by idiots. She reminds me a lot of Gorgo, who is this Spartan princess Herodotos tells us about who, also, was surrounded by idiots. I like to think they are related and that Hermione would be proud of her.

Come back next week for Aegiale.

Klytemnestra is the wife of angry-face Agamemnon who, right before he left for Troy, killed their daughter Iphegenia. She, understandably, did not forgive him for this. The story goes that she took as lover Aegisthos, who was Agamemnon’s cousin (I think? Their family tree is super messed up, considering Aegisthos was the son of Thyestes and Thyestes own daughter Pelopia, It gets really complicated really fast).

ANYWAY. When Agamemnon came home (with a lady in tow, I might add) she welcomed him AND THEN MURDERED HIM, with the help of her lover-lad. This is, of course, just another way we see Greek men’s fear of women’s sexuality exposed. HOW DARE SHE take a lover. LOOK HOW DANGEROUS is it when women make these decisions. DEATH and MURDER and MORE DEATH.  *ahem* Not that I’m biased. At all.

I love Klytemnestra (at least the one portrayed by Aeschylos) because she is such a good villain. You understand she is motivated by grief at the death of her daughter and outrage at her husband’s infidelity. She took her life, her love life, and her desire for vengeance in her own hands, asked for no apologies, and regretted nothing.

Want more bad-ass ladies? Last week was all about Penelope and next week is about Hermione. See you then!

While Odysseos was off traveling and fighting (and getting lost, pff, men) Penelope had to stay at home, raise a child, take care of a city, fend of suitors, take care of civic and religious responsibilities, all without offending anyone and maintaining relationships with any allies she could gather. She is known for her loyalty and, most importantly for Greek men, for not jumping into bed with a man who was not Odysseos. Greek men were really terrified of women’s sexuality and did everything they could to control it. *major eye roll* ANYWAY. What I, personally, love about Penelope is how bad-ass she is. She is able to juggle a lot of responsibilities and has to be majorly smart to outwit all of the idiots that surround her. I also love her loyalty, but really, I love how smart she is.

I don’t, alas, have time to do full Iliad posts – yet. BUT, I  miss this and I want to be able to post SOMETHING for you all, so I have a couple of “Meanwhile In…” posts for you. Because the Iliad is super MANLY MEN I thought it would be fun to think about what is happening at home with the lady-folk who got left behind.

Next week we’ll check in with Klytemnestra!

In the book Hittite Myths as translated by Harry A. Hoffner, Jr. (second edition) there is a section on Hurrian Myths. In tablet one of “The Song of Ullikummi” it says:

And later in tablet 3:

“When Tasmisu heard Tessub’s words, he quickly arose, [took] a staff in hand, put the winds on his feet – like winged shoes, and went up on the hightowers” (48.Aii 1-2).

Kumarbi is trying to dethrone Tessub (sometimes translated as Teshub), who is currently king of the gods. Tasmisu is Tessub’s vizier (he and Tessub are both “sons,” of a sort, of Kumarbi). Actually, the Anu, Kumarbi, Tessub storyline has a lot of parallels to the Kronos, Ouranos, Zeus story… Ahem. Anyway. That would be for a different day. We’re going to set aside Kumarbi for right now and look at the vizier, Tasmisu.

Kumarbi is on the left, Tessub on the right

Tasmisu is acting as a messenger. He grabs his staff and puts the wind on his feet, or, basically, his winged shoes. Who else has a staff and winged shoes? Specifically, in the Hellenic world? But of course! Hermes! Tasmisu also, later on in the story, leads Tessub to visit Allani, “the lady” who ruled the underworld (known as Lelwani to the Hittites, and possibly connected to the Sumerian Ereshkigal ). Hermes is also a cthonic deity who is able to go freely from the underworld and back and acts as a psychopomp, leading people safely to the underworld.

It makes me wonder if all of these stories of gods putting winged shoes on their feet and wandering around to the underworld eventually morphed into the Hellenic Hermes? There seems to be some sort of kinship there.

Tasmisu on the left, Hermes on the right

(to see the inspiration for Teshub click HERE.) There is also more information about Hittite/Hurrian mythology. Just remember that mythology is not always kid friendly, as it were.

I have so many thoughts about Diomedes. He goes on about how he’d never dare to fight an immortal, but we know that’s not true. He goes on about the sacredness of guest-friendship (also known as xenia), but is that because he’s pious or because he’s tricksy? Does he think Glaucus could actually hurt him and so finds a way around fighting him? I don’t think so, based on him trying to attack Apollo and attacking Ares. So maybe he is a pious man? I just have so many questions. I love this man.

Short post today. We shall have a silly “fanfic” post on Friday and should be back on Monday with the next post, which will star our fabulous non-helmeted-but-really-should-have-one Hector.

To Read a Ridiculous Comic About Aeneas and Zombies Click HERE.
To Read “Hector Within the City Walls” Click HERE.

A few Mondays ago I got a book in the mail entitled Hittite Prayers by Itamar Singer, as part of the Writings From the Ancient World Series. (Which was very exciting. I almost stopped breathing trying to explain to my mum how excited I was because, yes, I am that much of a nerd.) While reading it today (in between editing pictures, because my editing program is so ridiculously slow) I came across this line:

This, of course, reminding me of The Iliad  when the Trojans and Achaeans are facing off to battle after Menelaus is wounded:

“Behind them, Ares, as behind the Greeks/ The goddess Athena with sea-grey eyes,/ And on both sides Terror and Panic” (Lombardo, 4.471-3).

*Those on the right should be recognizable as Panic, Terror, Athena, and Ares. On the left we have Shamash wearing his epic hat and holding something that I’m sure is important in his hands. Next to him are the two viziers Bunene and Misharu both of whom I want to do more research on.

Yes, those are horses. No, they are not giraffes or dinosaur hybrids.

Also, marsh parsley is similar to celery, apparently, according to my eldest sister’s research.

Also, Menelaus so badly wants to be important, but no one is paying any attention to him. He didn’t even make it into the strip this week, poor guy

And I think that is all! The end of Book 3 will be up on Wednesday! Huzzah!

To Read Death Comes at the End… Click HERE. 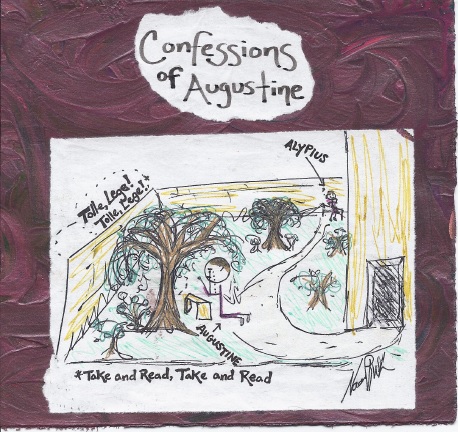 **There may or may not be more Augustine in the future. He wasn’t my favorite, but there are definitely moments worth sharing.**

**The Tarquins are another one of those stories you will definitely see more of, barring death or insanity.**