-_- The second to last panel is supposed to say leather-worker and I ONLY JUST NOTICED IT NOW. I will try and go back to fix it later. AUGH.

Also, I am imagining Ajax Telamonian with sort of a Lumpy Space Princess type voice happening? Because my brain is a weird place.

I know this is short and you have to wait A WHOLE FLUFFIN’ WEEK for the next installment, please don’t throw rocks and/or shields at me. *throws shiny glitter to distract you and runs away*

But seriously, if you are still reading, which I’m assuming you are if you’re reading these words, thank you for reading and sticking along. ALSO, feel free to share this with your friends/mother/grandmother/librarian/nerdy person in your life if you think they would enjoy this. ❤

Have a wonderful day, lovelies! 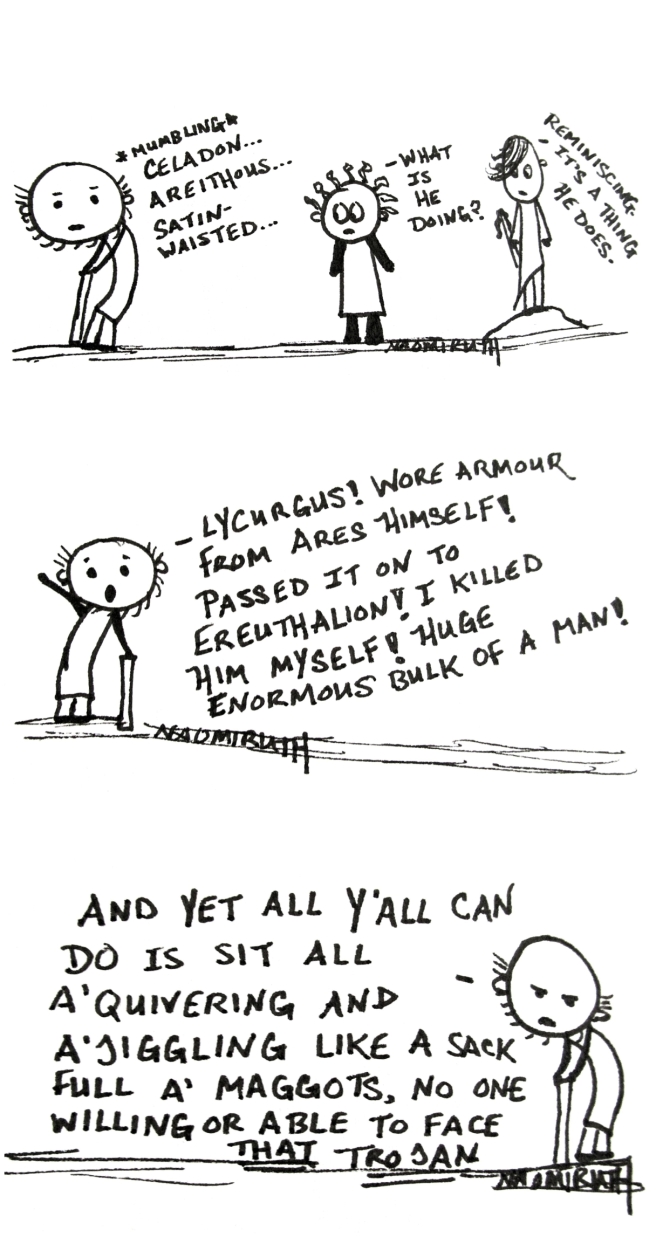 Nestor amuses me every time. Every. Time. His speech is actually important to many academics for Reasons, but I cut most of it BECAUSE we don’t have time for that.

Talthybius, the messenger dude. KEEPS. SHOWING. UP. One of the problems of reading and writing as I go and not planning anything means I don’t actually know who is going to be important. Like, BTW, there are two Sarpedon’s and I was like: “Make sure you don’t mix up the Sarpedon’s Naomi,” AND I’M PRETTY SURE I DID ANYWAY.

Thoas and Eurypylus will probably die so I hope you are not attached. I tried not to make them too remarkable. I don’t really know why they pop up here with our other main characters *shrugs* But who knows?

And, same as last week, we will be skipping over Monday and the next post will be Wednesday. I am hoping, hoping, hoping, I can make some sort of progress, but with Christmas Season on its way (yay for retail) I honestly Can Not Make Promises because I will probably break them. I also have a short wedding celebration trip in October, sooooooo…. Not a lot of extra time *cries* BUT OH WELL.

Hope you are having a lovely week!

Join us next Wednesday for: Lots are Chosen. 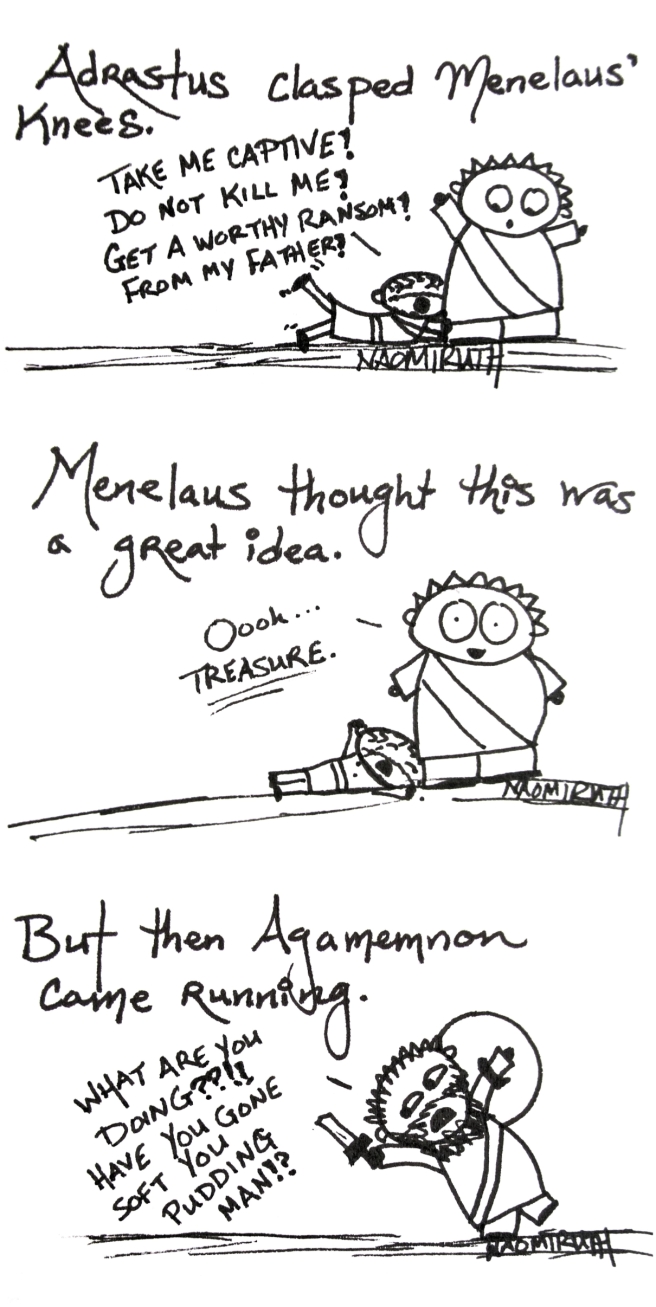 I was excited because Acamas showed up again and I didn’t think he would… And then Ajax happened.

What I love about the Iliad are how many stories are untold. Like Axylus. There is a whole story there we are only given a peek of.

I feel like there’s more I wanted to say, but this is my first day without having to go to work or do paperwork and I feel a little bit like death. Or maybe like Tisiphone, or whoever it is who stands over the lake of fire in the Aeneid. ANYWAY. I hope you have a good day lovelies! I’ll get you Part 1.2 and recaps at some point. I have a less crazy life for the next to weeks so *fingers crossed* I can get caught up on life.

To Read The Advice of Helenus Click HERE.
To Read About Hittite Prayers & Terror and Panic Click HERE. 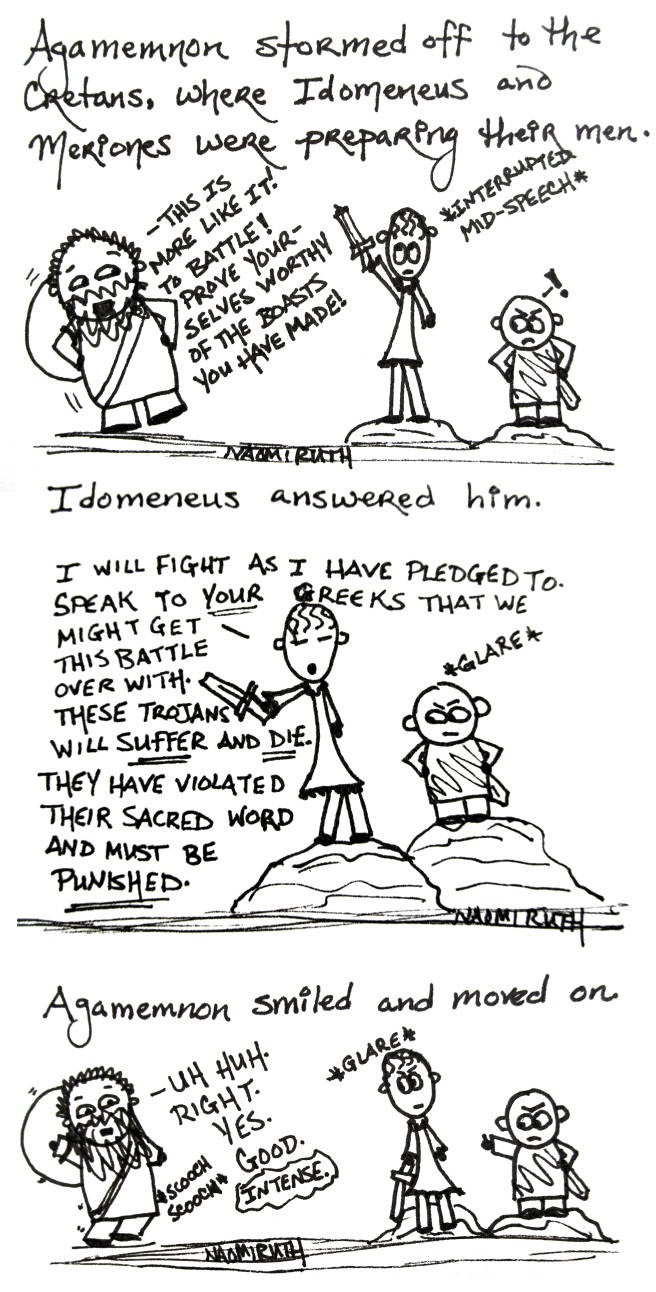 This second perusal of the troops is one of the reasons why people think The Iliad was written by more than one author. It was not that long ago where we were introduced to all of the generals. Also, it’s a little awkward. I mean. Paris and Menelaus were just fighting. Agamemnon calls for war. And meanwhile, all of the Trojans are just STANDING there, twiddling their thumbs, waiting. HOWEVER, one could argue that we’re just about to plunge into battle, it’s a good idea to remind your audience of some of the Most Valuable Players, especially considering this was originally a tale that was being told outloud from memory to a crowd that may not be consistent. Repetition is important to remind people of what is going on and who is going on

Also, Nestor does not speak consistently at all, and while normally I am all about having consistent dialogue I have come to accept that Nestor just does what he likes and really doesn’t care what I think.

Also, I don’t really care about the Ajax’s (at least, not in The Iliad. Sophocle’s play is another story).

Also, also, Idomeneus finally gets to speak. Hooray for him!

Join us next time for Book 4, Part 2.2: Agamemnon is Annoying and Eris Awaits.

Agamemnon is such a moron. Really? You’re going to blame Zeus for all this? Because that’s so smart.

Also, I don’t know what happened to Nestor. He turned into, like, a Southern Pirate Who’s Pretending He Might Be Scottish? I’m not really sure?

Also, Menelaus really wants to be important, but he just isn’t.

ALSO, in other news, I am going to be upgrading so I will have room for pictures. Huzzah for having a retail job. ALSO, I got a new drawing pen, which was exciting.

Next time we learn random stories about random people that aren’t really necessary for the story. 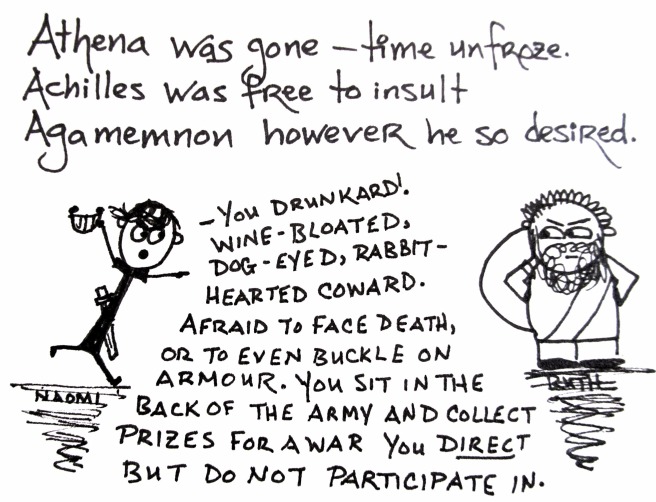 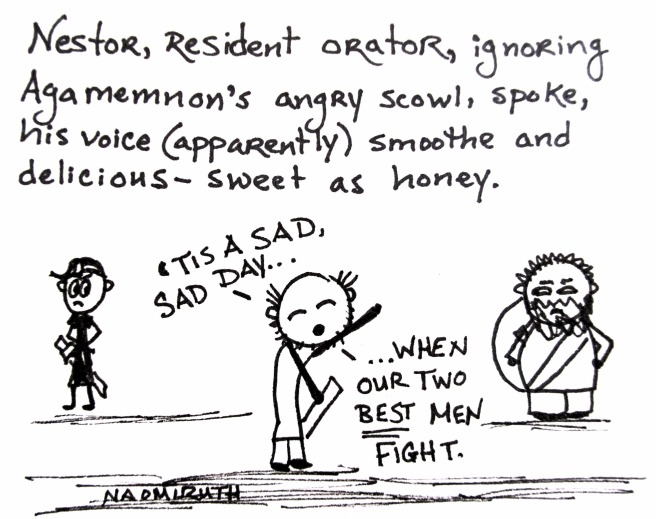 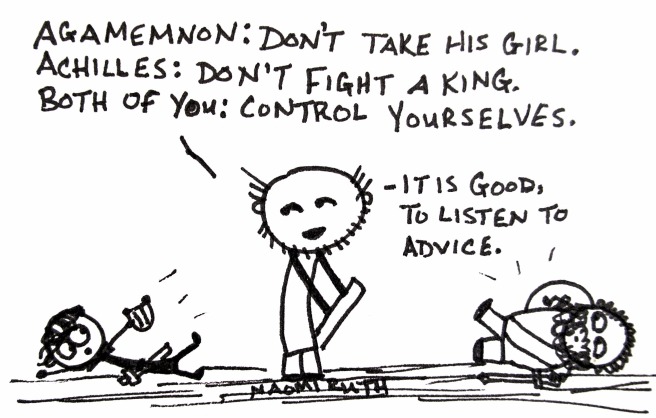 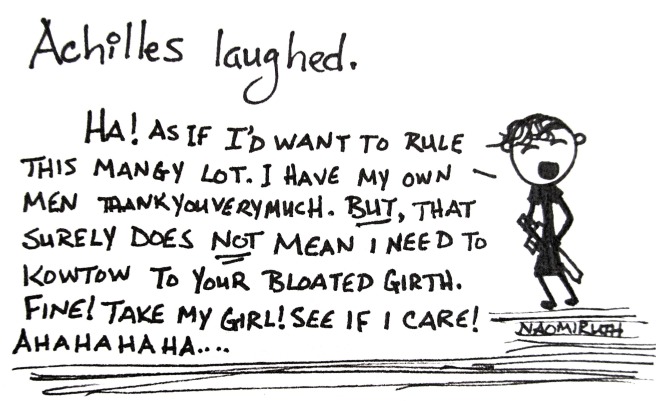 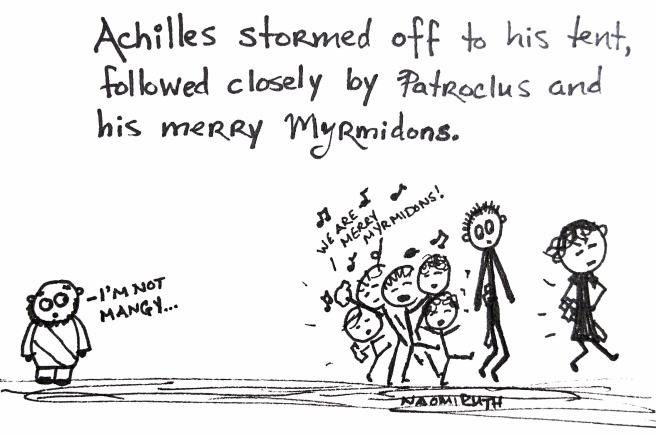 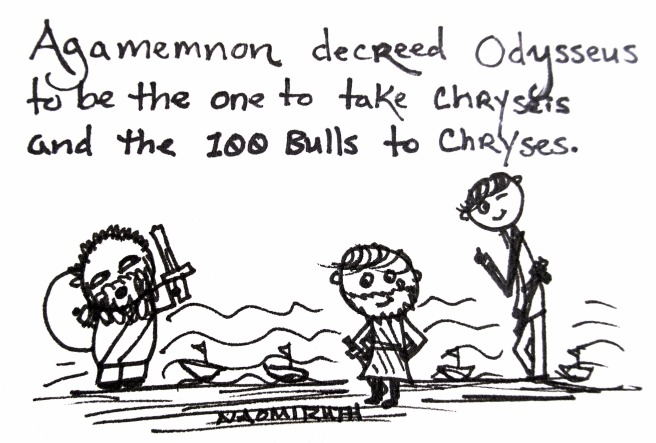 No one ever listens to the smart people in epics. NO ONE. (It’s just as bad in Song of Roland, if memory serves correctly.)

Also, poor Phoenix is having an identity crisis.

NOTE: You probably are wondering who the Myrmidons are. Or. Maybe you aren’t. BUT IF YOU ARE: The Myrmidons were a group of warriors from Thessaly, in Greece. According to legend Zeus took a colony of ants and zapped them into a group of warrior-men (myrmex is the Greek word for ant). I’m not really sure why Zeus did this, but I’m sure it amused him.

Return on Wednesday for Book 1, Part 3.2: Problems of Obedience.