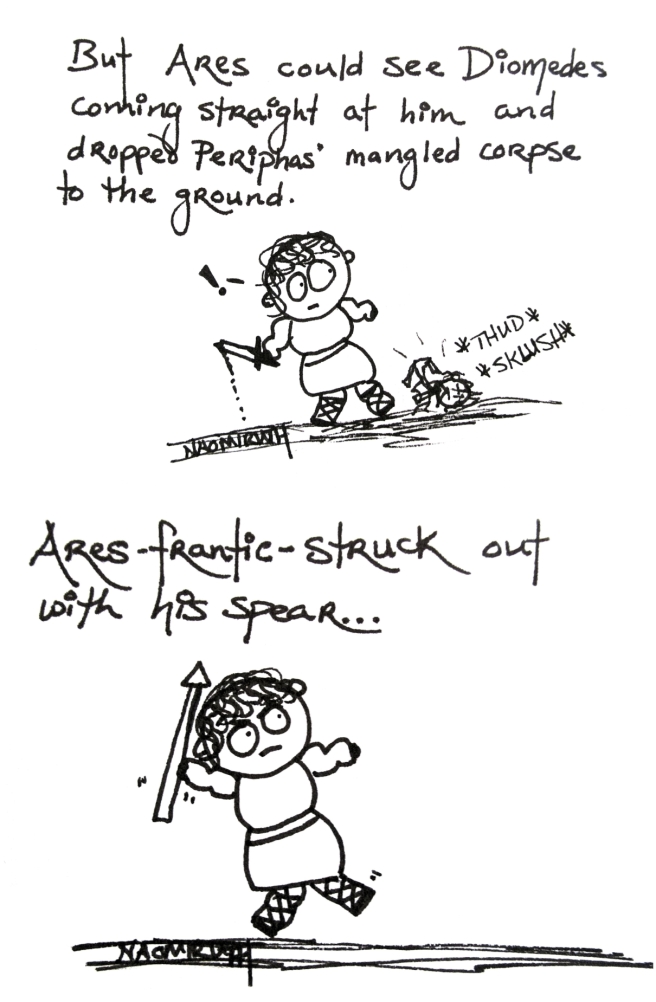 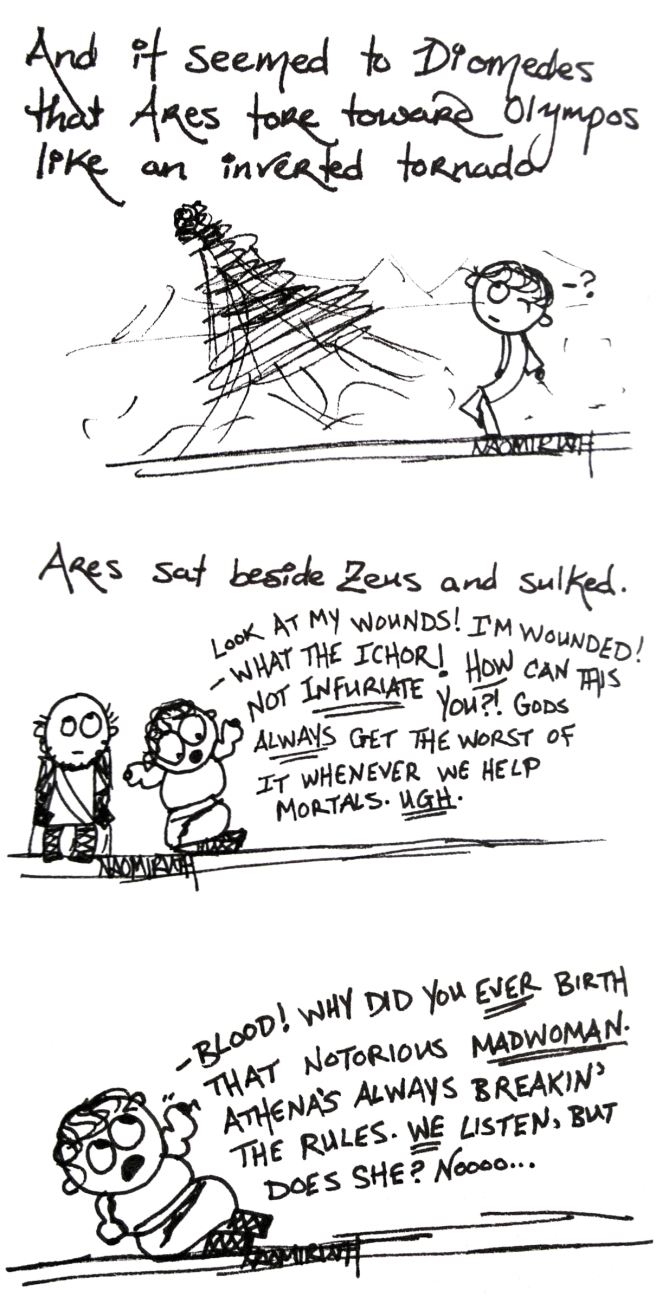 First I would like to say: YES WE FINISHED BOOK 5 AHAHAHAHA…

Second, I am laughing at myself because I thought there would be only one Part 7 and instead there were two and part 7.2 was the longest section I’ve had yet.

You can’t really read it, but on the side of the Helmet of Invisibility it says “Property of Hades.” WHICH makes me ask the question: why the heck does Athena even have this? Did she ask to borrow it? Did she steal it? I mean. Hades doesn’t really show up in the Iliad so why does his helmet. So many questions. So. Many.

I find it fascinating how much everyone hates Ares. I really think that this scene with Zeus and Ares is where Homer shows through. When Zeus is talking about how much Ares’ disgusts him all I really see is Homer stepping into the role of Zeus and using him as a way to express how much he himself hates war.

Paieon is not really important, so I didn’t draw him with anything memorable. He is sort of like an avatar of Apollon/Asklepios or something anyway so… Feel free to ignore him.

But Hebe, man. Do I want to know more about Hebe. Who is this random lower ranking goddess? She helps bathe people, helps them into chariots… It’s just so random. She’s like the extra who fills in the un-cast parts or something.

As for the bathing, it may seem random that Zeus is suddenly shouting at Ares to take a bath but remember, despite how clean he looks in the drawing, he is actually COVERED in GUTS. I cannot draw guts, so I apologize for the lack of them, but the point is Ares is disgusting and gross right now and decided THIS is how he should show up to the Father of the Gods. It is incredibly insulting to show up in front of a god in this state. In pretty much every religious tradition you wash yourself before you enter sacred space. This is true for Egyptians, Canaanites, Israelites, Hittites, and all of the Greeks. And yet Ares shows up covered in intestines and soaked through with blood. What are you thinking, Ares? What are you thinking. Athena and Hera might be sassy and make their opinions clear, but both of them prepared beforehand, dressed well, and spruced themselves up first, being aware of sacred space and the proper ways to behave in front of divinity.

Anyway. I could go on, but there’s that.

AND SO, eventually we’ll start up the next book and I’ll get you a recap of Book 5 and everything. I know we’re behind again, but I worked like 58 hours this past week so I’ve just accepted that this will get done when it gets done. I do start my library job training tomorrow and then I have the rest of the day to work on stuff so *fingers crossed* I can get some Book 6 drawing done.

ALSO ALSO I love these little guys and I am so grateful for all of you who have been reading along. Thank you ❤