*In case you missed it:
The Argives
The Trojans
The Immortals*

These are the characters that do not belong to either side and, for the most part, are adversely affected by the Trojan War. 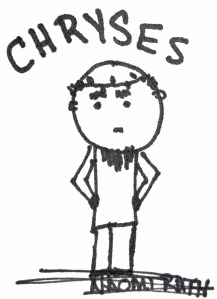 Chryses, a priest of Apollo whose daughter is stolen away, but Apollo has his back. According to some dude named Eustathius he was the brother of Briseus. He also knew Orestes, but that’s not important for The Iliad.

Chryseis, island babe, daughter of Chryses, also know as Astynome. Stolen by Agamemnon, but given back to her father and disappears from the story pretty quickly. She is bitter about this, however, she shows up in Medieval literature later, under the name Cressida, so she shouldn’t be that upset. 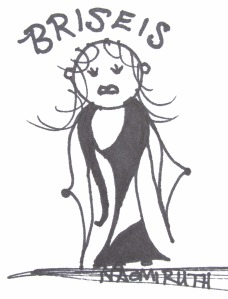 Briseis, also know as Hippodameia, a war prize for Achilles, princess of Lyrnessus, stolen by Agamemnon. Her father was Briseus, brother of Chryses; her husband was Mynes (was being the operative word); and she used to have three brothers. Her life is crap. 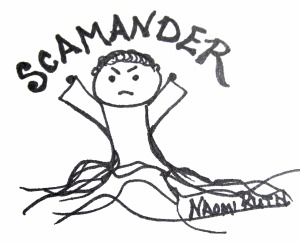 Scamander, the anthropomorphic personification of the river Scamander, also known as Skamandros Xanthos (but only the gods called him Xanthos, so it would be disrespectful for us to use that term). He finds Achilles to be more insufferable than I do. I may love him more than Diomedes, but don’t tell Diomedes I said that. 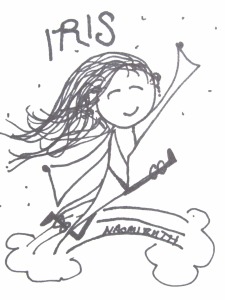 Iris, the messenger of Zeus, anthropomorphic personification of rainbows, not really on anyone’s side, has similar functions to Hermes. 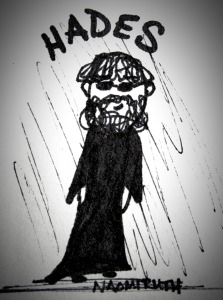 Hades, Lord of the Underworld. He’s not actually in The Iliad, HOWEVER, I am putting him in The Iliad anyway, because I love him, and he’s fabulous.

And there you have it, the final characters. Some other people may show up, like Sarpedon, Ganymede, Thaos — but don’t worry about them. I’ll explain who they are as they appear.

In the next couple of posts I will give you some background information on the author, Homer, and the text. Because they are shorter I’ll be posting the series of Informational Posts on Monday/Wednesday/and Friday of this coming week (which hopefully I will not regret, because More Work). There will be fewer pictures, but it will make everything make so much more sense later. I will do my best to make it as insufferable as possible… er… un-sufferable? I will hope to make you not suffer very muchly. Something like that. Okaybye!

To Find Out Where the Mediterranean Are We Click HERE.

4 thoughts on “Who You Need to Know Part IV: The Rest”